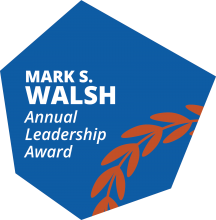 Mark S. Walsh was comptroller of National Stone Association producer member Rein, Shultz and Dahl of Illinois and an active member of the Young Leaders Steering Committee. He was an energetic and enthusiastic supporter of the Young Leaders’ mission, purpose and activities. In the two years that Mark served on the Steering Committee, he offered sage advice and unique insights on exactly what the focus and purpose of the Young Leaders should be for new young executives in the aggregates industry, like himself. Mark passed away from leukemia in 1999 at 37 years old.