ALEXANDRIA, VA – The National Stone, Sand & Gravel Association (NSSGA) today announced a winner in naming the seat belt safety campaign, to be titled “Why risk it? Just click it!” The campaign’s focus is to remind the aggregate industry’s workforce of the importance of wearing seat belts on the job.

The winning slogan – “Why risk it? Just click it!” – was submitted by Johnny Farley, plant manager at the Cross Plains Quarry of Rogers Group, Inc. The slogan was selected through a naming contest of NSSGA member company employees. The newly revealed graphic incorporates the seat belt safety slogan and will be used in collateral and messaging across our membership. 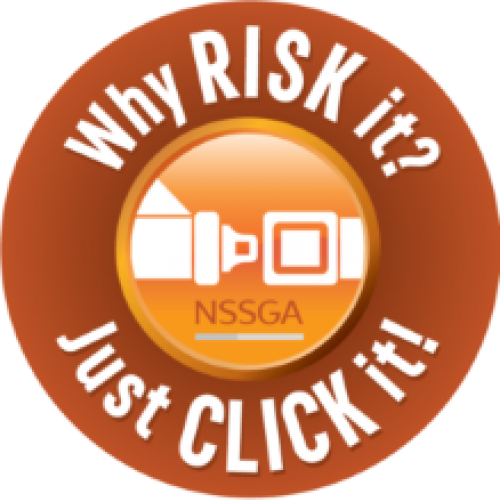 “Safety is a top priority for our industry. NSSGA represents over 100,000 men and women who produce the essential raw materials found in every home, building, road and bridge across the country,” said NSSGA President and CEO Michael W. Johnson. “Our members place great importance in the need to reinforce the wearing of seat belts on the job. We felt there was no better way to get that message across than to engage our workforce in naming the campaign.”

NSSGA launched a contest to name the seat belt safety campaign in February at its Annual Convention in Indianapolis. Over a three-month period, NSSGA accepted submissions from member company employees. In total, NSSGA received 333 submissions from 90 people, representing 47 member companies. A panel of NSSGA staff judged the submissions individually, without knowing from where each submission was submitted. Those results were compiled to reach a winning slogan.

“We were thrilled to hear that Johnny had submitted the winning slogan, but not a bit surprised,” said Rogers Group President & CEO Darin Matson. “Rogers Group has a strong safety culture, and Johnny has been a champion of that culture at our Cross Plains Quarry, which is approaching six years injury free. We’re proud to have him on the RGI team and congratulate him for helping spread the safety message on the national level.”

The seat belt safety campaign slogan will be incorporated into messaging and graphics to be available for member company facilities. Farley will be recognized for his winning entry at NSSGA’s Legislative & Policy Forum, to be held in Washington, D.C., Nov. 18-20, 2019.

“We are proud to recognize Johnny Farley on winning our seat belt safety slogan contest and express our appreciation for the participation of all our contestants. Such involvement from our members make us stronger as an association and an industry. And a special congratulations to Darin Matson and the Rogers Group, Inc., team,” added Johnson.

NSSGA is the leading advocate for the aggregates industry. Its members – stone, sand and gravel producers and the equipment manufacturers and service providers who support them – produce the essential raw materials found in homes, buildings, roads, bridges and public works projects, NSSGA represents more than 90 percent of the crushed stone and 70 percent of the sand and gravel produced annually in the United States. Learn more at www.nssga.org.